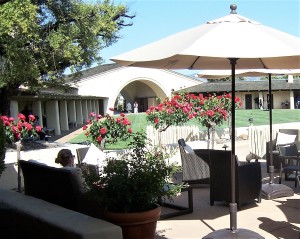 I just returned from the Taste of Oakville held April 29 at the Robert Mondavi Winery in Napa Valley.  This is the preferred venue for the event.  Every time I visit this winery, and it has been many times, I never fail to be impressed with the grandeur of the facility – the thoughtful design and layout, the attention to detail, beauty, and utility, and the immensity.

Walking through the “forest” of fermentation tanks

Cabernet Sauvignon grapes, parented by a fortuitous crossing of red Cabernet Franc and white Sauvignon Blanc somewhere in the mists of time in France, produces big, dense wines.  Tannins can be astringent and grainy until aging takes over.  Often Oakville AVA Cabernet Sauvignon benefits in increased approachability from continued bottle aging after release.  This is because Cabernet has a lofty tannin and polyphenol content due to the large pip (seed) compared to the relatively small Cabernet berry size, and the large surface (skin) to volume ratio.  Cabernet needs these substances because polyphenols lend color and antioxidants, while tannins provide structure and aging potential.  However, at this tasting I found many wines that revealed great elegance and affability. 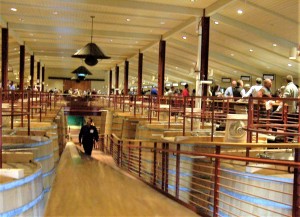 Up the ramp to the tasting site

One of the first areas to receive AVA (American Viticultural Area) designation in 1993, Oakville has produced more than their share of top tier Cabernet Sauvignon wines that are in great demand.  It has even been stated that Oakville has produced America’s only “first growth” wine.  Oakville’s success derives from a number of factors, including the terroir of climate, soils, micro-bio and more.  The pioneers including like Robert Mondavi and Joe Heitz figure in who not only produced top wines but contributed to critical infrastructure.  Success tends to be contagious and other parties with resources were attracted into the area.   Finally, the entire Napa Valley is known for sharing information and techniques which helps everyone.

As we’re discussing Oakville’s terroir we should expand on its geography.  The AVA is a patch of land in south-central Napa Valley about two miles wide reaching an elevation of 500 feet in the Mayacamas Mountains on the west and an elevation of 1,000 feet in the Vaca Mountains to the east.  Oakville AVA soils are residual (bedrock breakdown), alluvial (fans of material washed down), and fluvial, (finer grained loam).

My wine reviews follow, and as I said, these wines are among the most approachable and graceful from Oakville that I have tasted.

94, 2015 Bond St. Eden Napa Valley Bordeaux Blend
Ruby-purple and gushing with ripe dark fruit, this 2015 is extraordinarily supple and velvety on the palate conveying ultra-fine tannins. Delivers black-cherry, crème de cassis, and a hint of mocha  with depth of concentration, delineation, approachability, and overall harmony.  About $375.

93, 2014 Kelleher Brix Vineyard Cabernet Sauvignon
Purple with ruby hues in color, Kelleher’s 650-case Brix Vineyard effort is inviting and expressive if anything.  A bit more intense than the 2013, but it’s a season younger.  Plenty of luscious ripe fruit here, and the trace of acidity lends nice lift.  The calling card of Kelleher’s Brix Cabernet is subtle distinction and expressiveness, often with suppleness and grace, all of which this 2014 conveys.  Unveils an ethereal fine texture delivering black-cherries, blackberries, with a note of Cuban cigar wrapper.  Harvested October 10-12 & 14, 2014, and bottled December 10, 2016.  About $95. 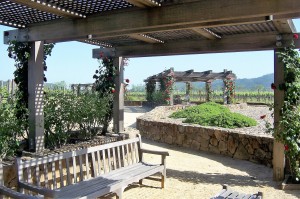 91, 2009 Ghost Block “Estate” Oakville Cabernet Sauvignon
In Valley folklore George C. Yount’s spirit, the first believed to have planted vines in the Napa  Valley, dwells in the Ghost Block vineyard and keeps watch over the Valley.  What we know for sure is that the 2009 Ghost Block is a pretty good bottle of wine.  Sporting ripe blue fruit, focus, and good proportions, the wine ends long.  Displays a nice subtle character with a gentle, supple palate-feel.  About $60.