It would not be easy to find a wine tasting pouring more high-quality Pinot Noirs than the PinotFest.  Many, probably most of the producers at PinotFest make their wines in small lots of well under 500 cases which facilitates focusing their attention on quality, and growing or obtaining superior grapes.

PinotFest was held for Pinot Noir fans the at the Farallon Restaurant on Union Square in San Francisco on Saturday, November 17.  I attended the tasting for the trade earlier that week.  Give credit to Peter Palmer, Luke Kenning, Dale Forest, and the others at Farallon who had the savvy to put together a special selection of great Pinot Noir producers and orchestrate the event so well.  They do this every year.  In fact, this is the 20th year running.  PinotFest is a great opportunity to taste and evaluate the Pinot Noir coming from California and Oregon.  Many winery proprietors were pouring and enjoyed commenting on their wines.

The California wineries pouring at PinotFest are located primarily in the Central Coast AVA and the Santa Rita Hills, the Sonoma Coast AVA, the Russian River Valley, Carneros, plus a few other zones. The Oregon wineries produce largely in the Willamette Valley AVA, the Yamhill-Carlton AVA, and the Dundee Hills AVA, with several other areas represented.

Burgundy has been known as the reference point for fine Pinot Noir.   So why these specific areas in California and Oregon?  Is not Pinot Noir a cool-climate grape?  But California is warm and sunny.  The most important factors are progress and location.  Progress has been made recently in the New World in vinifying this notoriously difficult grape.  Today’s Pinot Noir wine from the right location in California or Oregon is stellar! 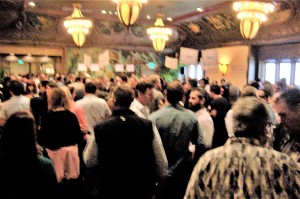 Let’s dig a little deeper by looking at the latitudes, the proximity to the equator, of some of these places.  The latitude of Burgundy, France is 47.0525° N (north).  By comparison, the latitude of the Willamette Valley, Oregon is 44.9426° N, very similar.  But that of Sebastopol in the Sonoma Coast AVA is 38.4021° N, and the Santa Rita Hills is 34-38’06” N, both quite a bit further south and similar to the number for Los Angeles of 34.0522° N, which is known better for Hollywood and the beach than for Pinot Noir.  So, what’s happening here?

Oregon’s Willamette Valley and Burgundy share a similar latitude as well as climate.  Both get more rain than California’s vineyards, and they are also cooler.  But in certain ways the California climate provides benefits over Burgundy, where botrytis and rain must be dealt with.  In northern California vintners producing quality Pinot Noir are using grapes from vineyards found in areas that are influenced by geographic corridors that channel cool ocean air inland, especially fog.  The nearly daily fog in summer is the result of cold, deep ocean water rising via marine currents.  The cool fog, arriving near nightfall and departing by mid-morning benefits Pinot Noir by enhancing aromatics in the wine, and assists retention of acid in the slowly ripening grapes.

The same is true for several areas of California’s Central Coast AVA.  The Santa Lucia Highlands just north of Salinas is one such locale where Pacific fog rolls inland through a corridor from Monterey Bay.  The Santa Rita Hills AVA (Sta Rita Hills) in Santa Barbara County also benefit from an east-west valley channeling the Santa Ynez River, bringing cool Pacific conditions and fog to its vineyards.

Others simply locate near the ocean and profit from the cooler climatic conditions present there.  Although cautioned the area was too cool for wine grapes, vintner Richard Sanford planted the Sanford and Benedict Vineyard in the western part of Santa Barbara County in 1970, making it a first in the area.  Sanford, a member of the Calfornia Vintner’s Hall of Fame, was pouring at PinotFest for his Alma Rosa winery.  Sinor-LaVallee Wines also grows estate grapes near the Pacific, only 1.2 miles from shore, and also poured their wines at PinotFest.  In summary, the location factor breaks down into being very near the ocean, or benefitting from a corridor that transports the marine climate to the vineyard, or growing grapes in a Burgundy-like environment found in parts of Oregon.

My tasting notes
91, Pinot Noir, Alma Rosa Winery, Bentrock Vineyard, Santa Rita Hills, 2016, about $62
Alma Rosa is located in the Santa Rosa Road corridor under Pacific Ocean influence on north-facing slopes, where the heat of the afternoon sun is reduced which, they say, permits optimal ripening.  This dark-ruby-purple, 290 case effort by Alma Rosa is packed full of dark, sweet, rich, full-flavored fruit.  Aromas of black cherry, rose petal, and sassafras climb from the glass, and strawberry, black tea, and cinnamon traverse the palate.  This mid-full weight features a velvety texture with fine tannins, and good length.

91, Pinot Noir, Byron Winery, Monument Vineyard, Santa Maria Valley, 2014, about $45
More than any other characteristics, Byron’s Pinot Noir over the decades exude a medium to full-bodied roundness with dimensionality, a silky-smooth glycerol-like texture, and they always showcase the attributes of the Pinot Noir grape varietal faithfully.  This 2014 Monument is no exception.  Most notable on the palate are black-cherries, mulberries, with just a whisper of green tea.  The grapes source from alluvial outcroppings and sandy loam soils at an elevation of 500 to 800 feet above sea level about18 miles from the Pacific.  Byron calls Monument their flagship Pinot Noir.  Roughly 300 cases were produced and oak was 100% French about 90% new.

92, Pinot Noir, Freeman Vineyard & Winery, Akiko’s Cuvée, Sonoma Coast, 2016, about $50
This medium-bodied, dark ruby-purple Pinot Noir delivers a rich robust character along with a deliciously near-compelling quality.  Simultaneously Akiko’s Cuvée reveals refinement, excellent definition, and fine balance while offering a rich rear-palate of intense, sweet red and dark fruit punctuated by Moyer plum, pomegranate, blueberries, and sassafras.  Has Burgundy character with a California sunt6an.  This 420-case production for 2015 is a selection of the finest cellar lots sourced from Freeman’s two estate vineyards Yu-ki and Gloria at 35% and 20% respectively, with the balance coming from Campbell Ranch, KR, and Pratt Sexton at 15% each.  The selection is typically sourced from cool locals, and 2015 is no exception.  After a five-day cold-soak, fermentation occurs in open-top fermenters with hand punch-down up to three times daily.  élevage follows for 11 months in French oak 45% of which are new, 20% one-year-old, and 35% neutral. 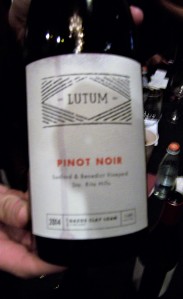 92, Pinot Noir, Lutum Wines, Sanford & Benedict Vineyard, Santa Rita Hills, 2014, $64
Velvet textured and perfectly balanced, the alcohol is pleasingly moderate at 13.9% in this deep garnet 2014.  Offers rich fruit without extremes unveiling Chelan cherries, pomegranate, and cinnamon.  Medium to light-weight, the finish is long and juicy.  The grapes for this wine were sourced from slopes of clay-loam soils from the Sanford & Benedict Vineyard, first planted in 1972.  Regime in the cellar was destemming, a five-day cold-soak, fermentation, then 18 months in French oak barrels.

93, Pinot Noir, Radio-Coteau, La Neblina, Sonoma Coast, 2016, about $50
The calling card to this exciting 2016 Pinot Noir is its exceedingly expressive flavor content.  The aromas are intriguingly viny, while La Neblina unveils on the palate spicy dried brambleberries, raspberries, dark red cherries, and a note of sarsaparilla.  The name means fog in Spanish due to the effect of the misty blanket that enters from the Pacific Ocean cooling the coastal Pinot Noir vineyards appropriately.  La Neblina is Radio-Coteau‘s flagship Pinot Noir sourcing in 2016 from the Kirk Lokka, Radio-Coteau, and Alberigi vineyards, and is bottled unfined and unfiltered.

92, Pinot Noir, Gisèle, WillaKenzie Estate, Willamette Valley, Oregon, 2015, about $30
WillaKenzie’s Gisèle is all about agility and expressiveness of the place, of the fruit, and of this dark ruby purple-tinged semi-transparent 2015 Pinot Noir.  Delivers complexity and good flavor content to the glass – strawberries, boysenberries, violets, and just a hint of allspice and forest floor.  The agility manifests itself as animation and responsiveness in the touch and feel.  This is also a complex wine.  WillaKenzie calls the winery a “site-driven, estate winery”.  Gisèle, named after the founder’s sister, is a 40/60 blend of fruit from the Jory Hills and WillaKenzie Estate vineyards.  The vineyards are named after the soil types: Jory’s soil is volcanic, and WillaKenzie’s is ancient sedimentary soil of marine origin.  Cellar treatment on this 180-case production included a six-day cold soak, partial whole berry fermentation, with total time on skins of about 20 days.  Élevage, 10 months in French oak, 20% new. 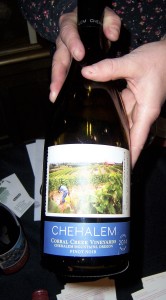 89, Pinot Noir, Calera Wines, Central Coast, 2016, about $30
This red-purple mid-light weight opens with a slight texture and a mineral background.  Aromas of forest floor and white pepper followed on the palate by red fruit, spice-box, and herbal notes.  The cellar regime was 14 days primary fermentation, 100% malolactic fermentation, and 11 months in 100% French oak, 10% new and 90% neutral.