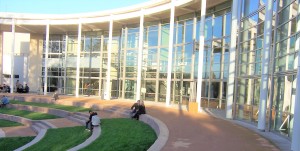 This venue being in wine producing Napa Valley does not necessarily mean that the 2018 Napa Valley Film Festival is wine-centric.  But in a wine-conscious society an abundance of quality wines will probably be made available at festivities.  And this is true at the NVFF.  But my point is the robustness of the offerings at this event.  To better underline the content of the Festival let’s use an acronym other that the conventional NVFF.  Let’s use FFFFF to remind and confirm the robust offerings of the Festival.  This acronym has meaning and in its simplicity is easily remembered.  The “F”s stand for –

Films.  Five days of films at venues a up and down the Napa Valley, playing many hours each day.  Some of the films screened included Tomorrow, General Magic, Food Evolution, Have it All, Soufra, and Happening: A Clean Energy Revolution.

Film industry personnel.  Actresses, actors, directors, producers, playwriters, film crew members, costume designers, the list goes on.  Many were present at tributes, Red Carpets, and other recognitions at the Festival.

Food.  Meaning gourmet cuisine.  It is a fact of life that Napa Valley boasts world class cuisine.  That cuisine showed up at dinners, parties, and other gatherings.  More detail follows.

Fine wine.  It is a given that fine wine comes from the Napa Valley.  It seems to be indigenous at the Festival too.  My wine reviews can be found below.

Friends.  Renew with old friends, and make new ones, plenty of opportunity.

I left out a few ‘F’s, like Festival, and Fantastic, but I want to focus. 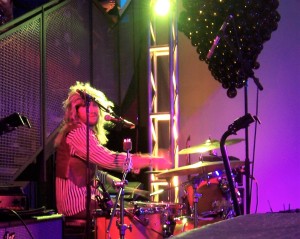 The Gala is the biggest party that NVFF holds during the week.  It is worth mentioning.  This season, and last, it was held at COPIA, a large, modern, two-story structure with numerous halls, chambers, spaces, auditoriums, patios, outdoor walkways, and waterways.  The Gala occupied the entire facility.  On the ground-level the food was found centered in the massive COPIA kitchen and dining area.  Wines were found throughout the entire facility.  Also, on ground-level was a band, an audio-visual attraction, and a number of booths offering a variety of drinks and attractions.  On the second level, which was open to the first level via an over-look, were the desserts. 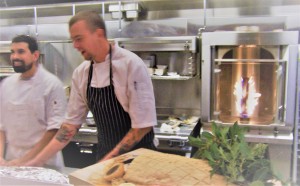 Delicious bites circulated on platters including thin-crust gourmet pizza, and pecans wrapped in a tiny leaves of endive covered with an exotic sauce.  I want to call particular attention to the salmon au beurre blanc from COPIA’s kitchen, which I also enjoy preparing and have always savored.  But the treatment on this recipe had a twist to it new to me.  It appeared and felt as if it were encased in a shell of concrete, with cross-hatch lines in it.  The shell was egg white with salt and herbs in the mix.  The salmon was served on a bed of frisée lettuce topped by the beurre blanc.  The texture of the salmon was the surprise, almost that of a mousse it was so light and fluffy.  Out of sight and over the top delicious!  The chef explained to me that to penetrate the hardened egg white shell to retrieve the salmon a hammer was required.  I’m not saying how many pieces I ate. 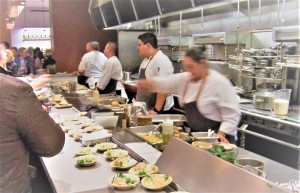 Access to the desserts was enhanced by a staircase at each end of the buildings.  Among the temptations there was peanut brittle offered in multiple flavors, chocolate treats, crepes with fruit syrup, tiny cakes, and Sweetie Pies bakery brought mini-finger-tarts with a healthy pumpkin mousse filling.  It was all good! 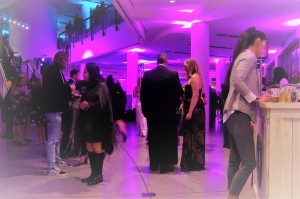 Cinema Napa Valley, the Festival producer declared the dates for the 2019 Festival as November 13-17.  I suggest you put that on your calendar as events for consideration.

Finally, my readers will be especially interested in the wine poured at the festival. 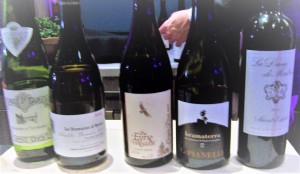 91, Pinot Noir, The Eyrie Vineyards, 2015, $30
Pastel-maroon in color, the restrained character and mineral overtones of this Pinot Noir hold the interest for what ensues.  On the palate red and black cherries with just a hint of cranberries open.  This mid-weight shows a velvety texture with mild, well-integrated tannins, excellent overall balance, and quality dark fruit.  Grapes are over two thirds estate fruit which is certified organically farmed on basalt soil, and élevage is in 11% new French oak.  A nice modest 13.6%

93, Le Pianelle, Bramaterra, Piemonte, 2011, $39
This blend comes from Bramaterra, a northern subregion in Piemonte (alto Piemonte) which outshone its southern neighbors Barolo and Barbaresco in wine production significance prior to World War I.  The soils of cooler climate Bramaterra are primarily sandy and volcanic, contrasted with the calcareous marls in Barolo and Barbaresco.  The 2011 mix, principally Nebbiolo with about a tenth each of local red varietals Vespolina and Croatina, was fermented in Tino, large conical oak vats, then aged in used larger casks and used barriques for nearly two years.  This 2011 effort, Le Pianelle’s second, would not be called dense but does display a robust presence.  Dusky garnet in color, the wine is lightly textured and very slightly coating displaying good purity of fruit and uniqueness of character.  On the palate stone, black cherry, and a hint of black tea. 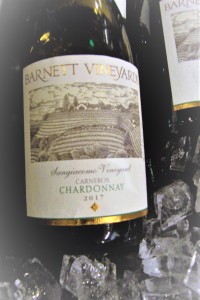 90, Chardonnay, Barnett Vineyards, Sangiacomo, Carneros, 2017, $35
The distinguishing characteristic of this sparkling medium-light-gold Chardonnay is exceptional purity of fruit.  Showing pineapple and mango aromas this mid-light-weight Chardonnay is especially smooth.  Delivers outstanding overall balance, finishing quite long with notes of pear and stone fruit on the palate.   The 38% malo-lactic fermentation left sufficient malic for a firm framework of acidity. 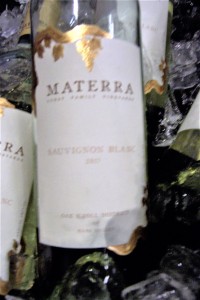 91, Sauvignon Blanc, Materra, Cunat Family Vineyards, Napa Valley, 2017, $25
This pale-straw 2017 conveys hardly a clue of sweetness in its invigorating acidic frame.  This brisk style of Sauvignon Blanc fits the character of the varietal so well.  Aromas of dry grass and white grapefruit, and essences of the palate fresh lemon and caramel sauce.

90, Plavac Mali, Grgic Vina, Grgich Hills Estate, 2016, $40
Plavac Mali’s parent is Zinfandel, or as it is known in its native Croatia, Crljenak Kastelanski.  Such an uncommon aroma and taste profile, and all good.in this deep-violet colored wine.  Presents real personality with aromas of dusty, dark cherry-fruit revealing a Mediterranean herbaceous charm alongside an earthy character.  At least mid-weight with fine tannins, the touch and feel are soft with a faint mealy impression to the texture.  Not shy on alcohol at 15%, this 100% Plavac Mali was harvested September 10-17 with sugar at 25 degrees Brix and fermented in stainless steel, and saw 12 months French oak.  Total acid is 5.4 g/L, and pH is 3.66.  Plavac Mali translates to “little blue” in Croatian, recognizing the small blueish grapes, which seem to show through in the violet colored wine.

92, Sauvignon Blanc, Acumen, Mountainside, Napa Valley, 2017, $30
The brisk entry and invigorating acidic structure of this light-straw colored, medium-light-weight is truly in synch with the character of the Sauvignon Blanc grape variety.  This deft 2017 delivers not only intensity, but deftness too.  Showing refreshing, herbaceous, and grassy aromas, a hint of white grapefruit on the palate complements and the finish is long.

91, Chardonnay, Rombauer Vineyards, Carneros, 2016, $37
Rombauer continues annually with their absolutely delicious, in-your-face, as I like to refer to it, Chardonnay.  Showcasing a creamy, smooth texture, and stuffed with aromas and flavors of fresh pineapple, mango, apricot pie, and Creme Brule.  In the cellar the grapes received whole-cluster pressing while still cool, then cold-settled overnight.  The juice was next racked to barrel for primary and malolactic fermentations.  Lees were stirred at two-week intervals to enhance the rich creamy aspects.