Golden Anniversaries in the business world are not that commonplace. Several studies indicate that only about 40% of new businesses survive past their fifth year. When fifty years of business operation occurs, it is worthy of mention. To wine fans this fact is especially noteworthy because Trefethen Family Vineyards from the Oak Knoll District of Napa Valley AVA celebrated their Golden Anniversary Party on Saturday, May 12. This family business must be doing something right. In fact, it must be doing many things right!

The word “Family” is particularly appropriate in this winery’s name. Gene and Catherine Trefethen purchased the 600-acre site in 1968 along with the existing winery, then in a state of unused disrepair, and began as grape growers. Second generation John and Janet began actual wine production as well as a restoration process which enhanced the winery in several areas which included a state-of-the-art fermentation facility, and a first-level concrete floor instead of bare earth. Loren and Hailey, the third generation, began transitioning in a few years ago and are actively working the business along with some support continuing from their parents.

Trefethen’s spacious salmon colored Historic Winery can be seen looking east from Highway 29 just north of Oak Knoll Road. The winery, once called Eshcol, was designed and built by a Scottish sea captain, Hamden McIntyre, who also designed some other prominent Napa Valley wineries including Greystone (The Culinary Institute of America), Far Niente, and Inglenook. McIntyre designed Eshcol on gravity-flow principals employing a horse-drawn winch to lift harvested grapes to the top floor, with gravity carrying the juice down to the second floor to be fermented. Ultimately, the wine descended to the ground floor for élevage (barrel aging). Today, primarily due to John and Janet, the winery is recognized on the National Register of Historic Places as the sole 19th-century gravity-flow, wooden winery remaining in Napa County. Gravity-flow is significant because it is a kinder and more efficient way to perform wine production.

Currently the function of the first floor is mainly for the élevage of wine in barrel, but also houses the visitor reception and main tasting room. A new tasting area resides on the second level with stunning views down through glass walls into the barrel rooms. Up a short flight of stairs, the third level is home to a truly cavernous tasting and banquet area constructed of wood throughout. Both second and third levels lie under the original soaring redwood ceilings. 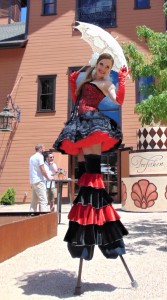 The well-tended condition of the entire property is the first thing that struck me as I drove down the lengthy drive through Trefethen’s estate vineyards, parked, and walked towards the Visitor Center. Upon arrival it was clear that it was party time! In the Front Courtyard performers were doing circus acts including a stilt walker, a multi-hula-hoop performer, and a gymnast suspended overhead from a cable.

I watched for a bit, then lost no time tasting Trefethen’s wines along with the delicious bites. My favorites were the chilled spring pea soup with tarragon spiked crème fraiche, and in the South Courtyard the citrus herb – spiced spring lamb accompanied by peel-and-eat fava beans with smoked salt. Trefethen’s estate wines served were 2017 Dry Riesling, 2017 Sauvignon Blanc, 2016 Chardonnay, 2017 S.I.N. Rosé, 2015 Cabernet Sauvignon, and 2015 Pinot Noir. I was impressed by the Dry Riesling with its purity of fruit, elevated acid level, aromas of white spring flowers, and pleasant bittersweet nuance on the finish.

As the day progressed, the Retrospective Tasting came to mind which I was attracted to due to my acquaintance with Trefethen’s 1992 Cabernet Sauvignon in 3-liter format, a beautiful effort which retained its youth to a remarkable degree. Offered at 10:00 a.m., 12:00 p.m., and 2:00 p.m. in the Villa, each session was hosted by a different Trefethen family member along with a representative from Trefrethen’s winemaking team. Janet and Haley Trefethen hosted the first two sessions, and I enjoyed the last session which was led by Loren. 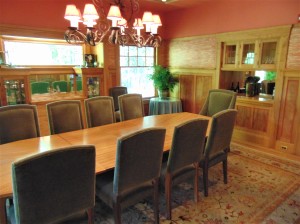 We reached the Villa after a circuitous path across winery grounds which passed through gorgeous, well-tended, gated gardens also displaying a massive, ancient oak. Previously this lovely dwelling, constructed early in the 20th Century, was the Trefethen family residence. It remains as a stylish illustration of the California Arts and Crafts Movement.

Loren greeted the arriving guests, and when all were seated he began by explaining that he especially enjoyed bringing people together over wine. He certainly filled that role and appeared to be in his medium. For the tasting we were settled in a lovely space where Loren explained that at one time a “dropped ceiling” had existed. To the owner’s surprise, once it had been removed the current ceiling was revealed in gorgeous honey colored, elegant woodwork. 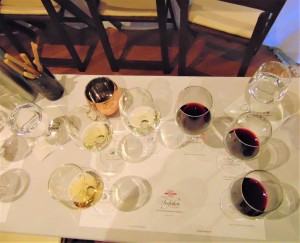 The tasting consisted of six aged wines from Trefethen’s library. Three Chardonnays came from the 1985, 1995, and 2009 harvests, and ranged in color from gold to straw. Three Cabernet Sauvignons were from the 1988, 1999, and 2004 harvests, and displayed in deep-brick through ruby colors. It was of interest to compare how viticulture and winemaking evolved in these wines as harvest date, alcohol level, and oak aging generally increased, as they had throughout the Napa Valley. 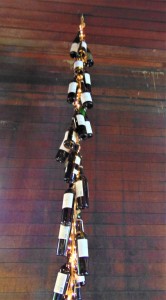 The only thing missing from this seemingly complete celebration was Loren’s Trefethen Vineyards Porsche 911 GT Cup race car. But the #13 Porsche shows its stuff much better on the race track, where Loren occasionally earns a podium position. He began his professional racing career in 2015 and drives against some stout competition around the USA and in Canada.

One final note about this interesting family. When my readers are visiting Trefethen, if they cross paths with Hailey they might ask her about her job, other than marketing and production, as beekeeper of the winery’s bee hives. She has a really sweet job!